DUI: Why was the cop looking at my eyes? 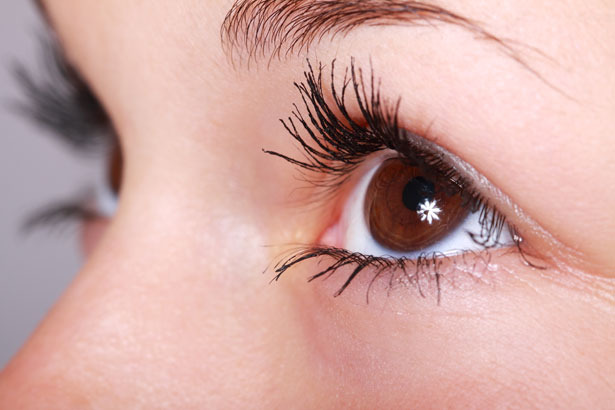 What do my eyes indicate about DUI?

Question:    I don't understand why the cop spent so much time looking at my eyes.  I was stopped for speeding and I know the policeman thought I was drinking so he asked me to do some tests.  I think he smelled alcohol on my breath.  I did his tests and thought I passed them but I still got arrested for DUI in Cherokee County.

I was driving home from a friend's party when I noticed the blue lights in my rearview mirror.  I pulled over and the Cherokee deputy said I was speeding.  I sometimes speed but I don't really drive that fast.  I sure don't go 30 miles per hour over the speed limit.

But he said he clocked me at over 35 miles per hour over and he asked me where I was coming from.  I said a friend's house and I said I had a couple of drinks.

That's when he told me to get out of the car and I did those tests for him.  I'm curious why he spent so much time examining my eyes.  What does it mean?  Can he tell if I was drinking by checking out my eyes?

Answer:    As part of the “standardized field sobriety tests” commonly administered during a DUI stop, the police officer is supposed to look at your eye movements to try to detect “nystagmus,” which is an involuntary jerking of the eye.  Research has shown that this involuntary eye movement equates with alcohol consumption.

The test is called Horizontal Gaze Nystagmus (HGN).  It was developed by a federal government agency to help police detect impaired drivers.

As DUI defense lawyers, we can argue that the test was not correctly performed by the arresting officer.  We have argued that many law enforcement officials have not been sufficiently trained to administer the test and that its accuracy is often in doubt.

Experience is so important to getting a great outcome.  We've served as a Magistrate Judge, an Assistant Attorney General and as an Assistant County Attorney.

So when you need a DUI defense team, attorneys William H. Sherman and Valerie W. Sherman should be your first choice!

With a professional background that includes serving as a Senior Assistant County Attorney and as an Assistant Attorney General, attorney William H. Sherman has great experience, a broad range of legal knowledge and a proven record of success.  Each of Mr. Sherman's clients gets the full benefit of his experience.  Because attorney Sherman has worked for governmental organizations, large corporations and clerked for a judge, he has handled a wide variety of cases from negotiation and trial to successful appeal. Mr. Sherman is very proud of his reputation as a problem-solver who is always available to his clients.  Active in the community, Mr. Sherman and his wife, attorney Valerie Sherman, support many community organizations, sports teams and charities.  Call him now and let his experience work for you.