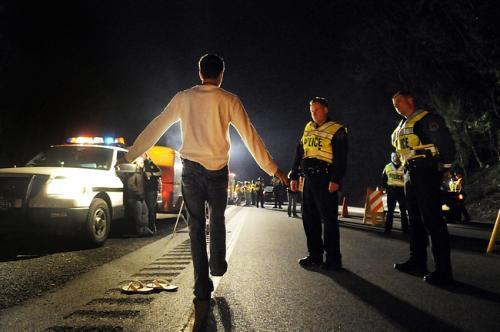 Field sobriety tests as performed at a DUI Checkpoint.

As DUI lawyers, we get a lot of questions about field sobriety tests from people who have been arrested for Driving Under the Influence (DUI).  The National Highway Traffic Safety Administration (NHTSA) developed field sobriety tests to help police officers determine if a driver is impaired by alcohol. The NHTSA has published its findings and disseminated its research to law enforcement agencies nationwide.  These tests were developed as another tool to help fight drunk driving.

Is The Driver Under The Influence?

Under Georgia law a police officer may conduct field sobriety tests if he or reasonably believes that the driver of the vehicle is under the influence of drugs or alcohol. The officer must specify in the police report, or when questioned by a lawyer, why her or she believed the driver was impaired by drugs or alcohol. The officer  may state that the person smelled of alcohol, had bloodshot eyes or admitted to drinking or taking drugs. If such reasonable suspicion exists the officer then can conduct field sobriety tests to further investigate the driver's condition.

Three Tests Are Recognized As Reliable

While some Georgia police departments utilize a variety of tests to determine intoxication, there are only three tests that are recognized by courts to determine impairment.  The tests are “graded” by the officer ostensibly by identifying clues as the driver performs the exercises.  The cop's analysis is admissible in court.  A DUI lawyer should be familiar with these tests:

1. Horizontal Gaze Nystagmus (HGN) Sobriety Test: The Horizontal Gaze Nystagmus (HGN) test has been deemed the most effective by many police departments, and is administered throughout the Atlanta Metro Area, North Fulton County and North Georgia.  Law enforcement officers claim that through this test they can best determine if a motorist has been drinking, and to what extent they are impaired.  So police believe that by using HGN they can not only tell if a driver has been consuming liquor, but how drunk he or she is.

As defined by the American Optometric Association, Nystagmus is a vision condition in which the eyes make repetitive, uncontrolled movements.

It is commonly called the “eye test.”  In the HGN test, the deputy will observe the driver's pupils to determine if they involuntarily bounce or jerk when asked to follow a finger or pen. Most people will display mild jerking at some point close to the outer edges of the eye. But, according to the NHTSA, an intoxicated person will display this eye jerking before the eye moves to a 45 degree angle.  In other words, the police officer is looking closely for jerking movements of the eye.

The NHTSA data show that even experienced drinkers and alcoholics cannot conceal the physiological effects of alcohol from a cop who is proficient in HGN administration.  This is because Horizontal Gaze Nystagmus is an involuntary reaction, i.e., an action which cannot be physically controlled.

2. Standing on One Leg Sobriety Test: The one leg stand field sobriety test involves an officer directing the driver to raise a foot six inches off the ground, hold it still, and count from 1001 onward. If the deputy sees that the driver is having problems with balance or counting, the deputy will suspect that the individual is intoxicated.

Not All Georgia Field Sobriety Tests are “Official”

Some tests, however, do not bear the “imprimatur” of the NHTSA.  Here are some of the more popular field sobriety tests whose efficacy is unproven:

Finger Count Field Sobriety Test: This test has not been proven reliable.  The deputy instructs the DUI suspect to touch their thumb to the tip of the index finger and count to one. The driver is then directed to touch each of the other fingers while counting up to four, and then to repeat it going backwards.

Finger to Nose Field Sobriety Test: Another test with little proven effectiveness is the finger to nose test. For this test, the cop instructs the suspect to touch the tip of their nose, keeping their eyes closed and head tilted back. The deputy will determine if the driver is able to touch the tip of their nose.  The police officer will watch the driver to see if he or she misses and touches other parts of their face.

Rhomberg Balance Field Sobriety Test: This test is sometimes required by a police officer.  But there is little data to buttress its reliability.  The officer will ask the driver to estimate 30 seconds of time while keeping their eyes closed, remain standing still and with their head slightly tilted back. The theory is that alcohol will affect an individual's internal clock and cause it to slow down.

Question: Will being tired affect an individual's ability to perform field sobriety tests?

Answer: Fatigue, some accept tests have shown, should not have a significant impact on test performance.

Answer: People older than 65 years of age show greater difficulty on the tests.

Question: Does a person's weight have an affect on the tests?

Answer:  If someone is 50 pounds or more overweight, there can be an impact on test performance.

HGN: What Does NOT Cause It -- According to the NHTSA

Oftentimes a police office will find 6 out of 6 clues for HGN.  HGN is the most difficult of the field sobriety tests to review from a defense perspective.  That's because the videotape of the test is usually made at such a distance that it is impossible to see the defendant's eyes.  Here are some things that do not cause HGN, according to some studies:

If, during your initial stop by law enforcement for a DUI, the officer asked you to perform one of the above mentioned tests, our office has the scientific capabilities and experience to challenge field sobriety tests. Sometimes the physical tests are unreliable or were simply administered improperly by the police.