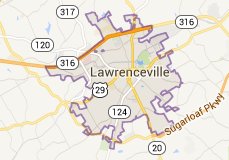 Have you been arrested for DUI within the Lawrenceville city limits?

The second oldest city in Georgia, Lawrenceville has become a busy and popular suburban metropolis.  Located in Gwinnett County, it has a high quality of life with good schools, safe neighborhoods and a lot to offer in the way of shopping, restaurants and other attractions.

Lawrenceville police officers will stop a car that has made a traffic violation. Most of the time this is for a minor infraction such as failure to maintain lane, speeding or even a tag light violation. Cops will also investigate a vehicle already parked or pulled over on the shoulder if they think something is suspicious.

Once they have made the stop, the officer will start his investigation. They will start a brief conversation to see where a person is going or coming from and to smell for alcohol on your breath.

The officer will look for other clues as well, such as open containers, joints, pill bottles, etc.

What is the officer is looking for?:

There are many things that can indicate a person has been driving under the influence of alcohol or drugs.  These clues include:

Why did the Lawrenceville Police Officer make me do two breath tests?

There are two types of tests. The one the officer gave you during the traffic stop is an investigative tool that tests for the presence of alcohol and is only admissible in court for a positive or negative reading for alcohol.

The second one is the Intoxilyzer test and is usually done once you have reached the jail. This one can be used in court as evidence for the level of alcohol.  And if you refuse, you could lose your driving privileges per Georgia's Implied Consent law.

The police officer took my driver's license.  Can I still drive?

Yes, you can still drive temporarily with the 1205 form the officer gave you.  That form serves as your driver's license, but for only 30 days.  Please note that it is very important that you or your attorney properly request an administrative appeal within 10 days of your arrest.

Your driver's license is the process of being suspended by the officer and filing the necessary paperwork with the Georgia Department of Driver Services is vital to keep your license. This will extend your driving privileges at least until your hearing with the administrative law judge and it gives your attorney opportunity to possibly save your license.

What about jail?  I don't want to go to jail.

Jail is possible with any DUI case, particularly if you have had more than one DUI.  But most times DUI attorneys are able to work out alternatives with the court. Every case is different and the penalties are greater with multiple DUI offenses. Having a good DUI lawyer working for you is crucial to minimize jail time.

The cop never read me my Miranda rights.  What should I do?

Most DUI investigating and questioning comes before the arrest. Miranda warnings only come in to play once you are “in custody.”  So Miranda is usually not applicable for DUI cases, although there can be exceptions.

I wasn't that drunk and my breath test score was below .08.  So why am I being charged with DUI in Lawrenceville?

Most people are under the wrong impression you have to have the magic .08 blood alcohol level in order to be charged and convicted of DUI.  But if the officer can show through proper evidence, i.e. field sobriety tests and video evidence from their dash camera, that you were a “less safe driver,” you could be convicted for DUI at any blood-alcohol level.  This is charged as DUI - Less Safe.

What is the Difference between a DUI and DUI Less Safe?

In Georgia, if a driver tests at .08 or higher on the Breathalyzer machine they can be cited for a DUI, or a DUI "per se". On the other hand, if a driver has a Breathalyzer reading of .079 or below they can still be cited for a DUI,  but under a different classification. This classification is referred to as a DUI "less safe".  This comes as a shock to many people, as most are under the belief that if they do not "blow" a .08 or greater, they do not need to worry about being cited and prosecuted for a DUI. This is not the case in Georgia. Georgia law specifically provides for a DUI "less safe" charge, and the officers know how to use it. The citation for DUI, whether it be "per se" or "less safe", will have nearly the same impact in court. In most cases, even the penalties for DUI per se and DUI less safe are the same.

Given the nuance, It is important to have an experienced Georgia DUI Attorney to make sure that you keep your license.

If I win my ALS (driver's license) hearing, can I still lose my license?

Yes, your driving privileges may be suspended if you are ultimately convicted in the criminal case.

What's the difference between the ALS hearing and the Lawrenceville Municipal Court?

In court, a judge or jury is hearing the criminal case and has the duty to analyze the facts presented and make a decision of innocence or guilt. The burden of proof in court is beyond a reasonable doubt.  There are no jury trials in the Lawrenceville Municipal Court.  There are only bench trials; that is trials where the judge determines guilt or innocence.

The ALS hearing, if properly requested, is an administrative hearing that only deals with a person's privilege to drive in Georgia. Driver's license hearings are conducted by an administrative law judge (ALJ) employed by the Georgia Office of State Administrative Hearings.  Unlike many legal matters, you are not entitled to a jury trial — the ALJ decides everything.

What are the prosecutors doing in Lawrenceville?

The prosecutors and their staff read the police reports, watch the officers' arrest video (if one exists), and will speak with any witnesses that may be relevant to the case.  As Lawrenceville DUI lawyers, we know that prosecutors look for some of the following elements:

The DUI lawyers at the Sherman Law Group are here to help you.  We are Lawrenceville DUI attorneys who offer a free initial consultation and case evaluation to anyone accused of a DUI.  If you have been arrested, contact us now.  We can be directly reached at 678-215-4106.

Most importantly, we have experience on both "sides" of a DUI.  As a former Senior Assistant County Attorney and an Assistant Attorney General, William H. Sherman knows how prosecutors work.  He uses that knowledge every day in court to win cases for clients.

Attorney Valerie W. Sherman has the extremely valuable experience of serving as a Magistrate Judge and as an Assistant County Attorney.  They both understand what it takes to get a winning outcome for clients.  Their relationships with prosecutors and judges have been built over the years and really help their clients.