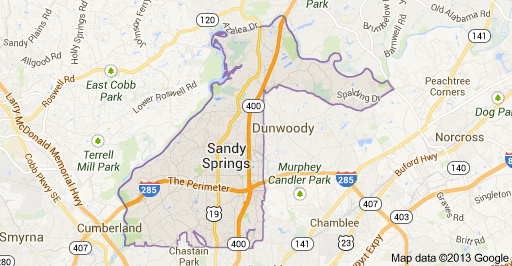 Have you been arrested within the city limits of Sandy Springs?

Were you arrested for DUI in Sandy Springs?

With a population nearing 100,000, the city of Sandy Springs is a populous, bustling and heavily-traveled area.  With great shopping, fine dining and plenty to do, Sandy Springs is a hub that attracts many people who want to live in a nice community as well as visitors who come for business and pleasure.  And with roads that include Georgia 400, Roswell Road and Hammond Drive, the Sandy Springs Police Department has ample opportunity to make many DUI arrests.  Add to all this the short drive to Downtown and Midtown Atlanta, and you have a city well-situated for crimes involving cars, like DUI.

The attorneys at the Sherman Law Group have many years of experience representing people accused of a Sandy Springs DUI.  Each court has its own “system,” its ways of conducting business, and we know how the Sandy Springs system works.  We have seen what strategies and tactics work, and which do not.  Attorney Valerie W. Sherman has served as a Magistrate Judge and as an Assistant County Attorney. Attorney William H. Sherman has served as a Senior Assistant County Attorney and as an Assistant Attorney General.  Because of this great experience they can represent clients exceptionally well in the Sandy Springs Municipal Court. 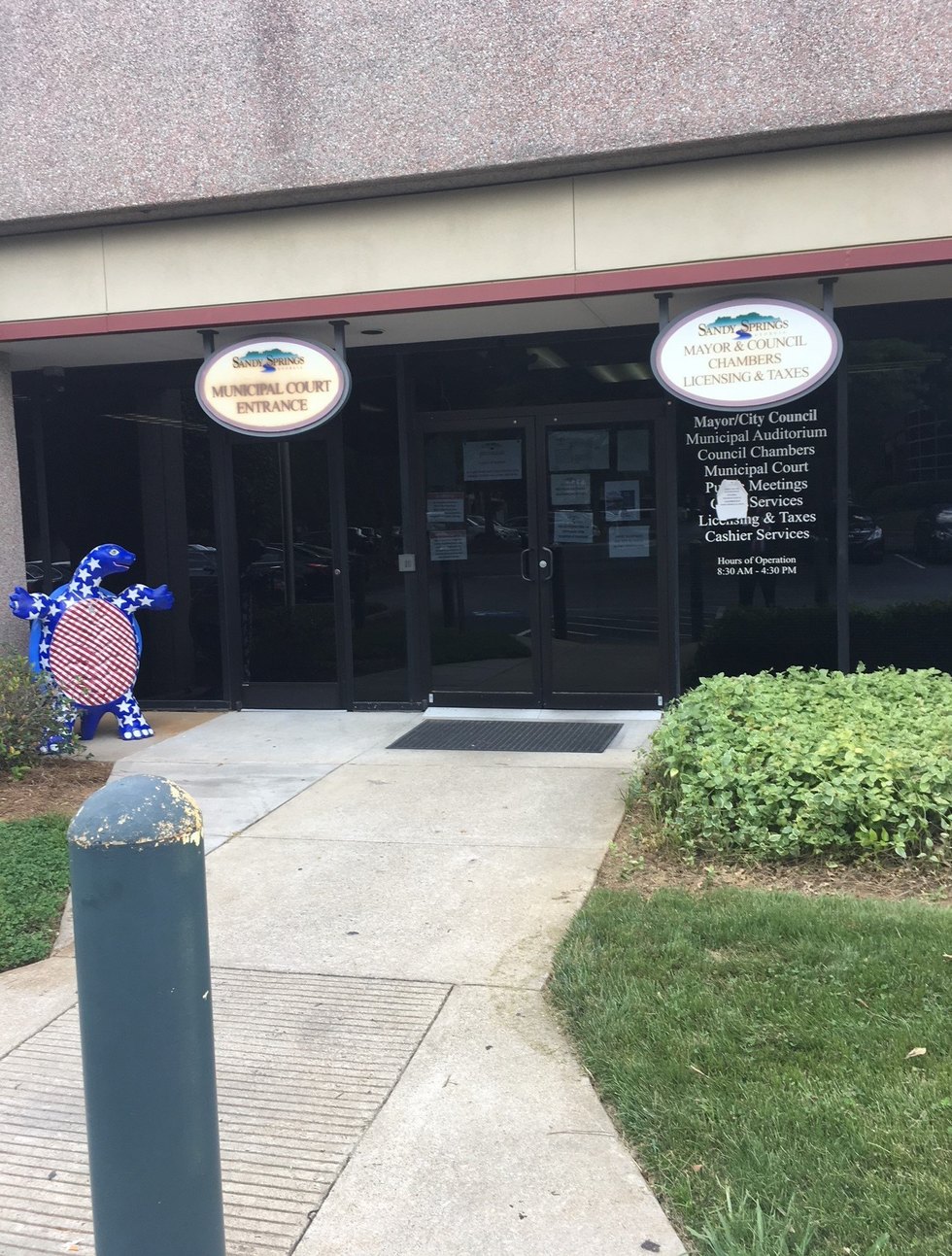 The Entrance to the Sandy Springs Municipal Court.

The duties of the Sandy Springs Municipal Court include:

A Sandy Springs DUI can cause a driver's license suspension.  If you are arrested for DUI in Sandy Springs and if your breath or blood alcohol registers over .08 within three hours of driving, or if you refuse a state administered chemical test of your blood, breath or urine, Georgia State DUI law provides that you be issued a Georgia Department of Driver Services (DDS) Form 1205.  If that happens you must act quickly and submit a proper appeal.  In order to save your driving privileges you need to file a “10-day letter,” which acts as an administrative appeal.  The appeal is submitted to the Georgia Department of Drivers Services (DDS).  In the 10-day letter you must request a hearing and raise certain specific issues.  These issues include actions the police took or should have taken in you case.  The hearing is known as an “ALS hearing,” which stands for administrative license suspension hearing.

Although no two Sandy Springs DUI arrests are identical, there usually are certain similarities.  Unless there is a roadblock, the driver is usually pulled-over by a Sandy Springs police officer for a traffic infraction like speeding or failure to maintain.

The officer will try to determine is the driver is impaired.  That usually starts with speaking to the driver and looking in the car for bottles of beer or alcohol or marijuana.  Officers will look for pill bottles as well.  The Sandy Springs police officer will try to determine whether the odor of alcohol is present and whether the driver is showing signs of intoxication.  These signs can include slurring speech, and bloodshot, glassy eyes.  Of course the police officer will ask the driver questions, which could include if the driver has had a drink that evening and where the driver has been, perhaps at a bar, club or restaurant.  The Sandy Springs police officer is trying to get the driver to admit to drinking.  The officer can try to "trick" the motorist into admitting that he or she was drinking. Some of the officers are quite adept at soliciting admissions that a person has been drinking.  Sometimes a suspect will even tell the officer what he has been drinking, i.e., beer, vodka, gin, wine, whiskey.  Some drivers will even use brand names such as Bud, Coors, Jack Daniel's, Dewar's, Bacardi or Johnnie Walker. 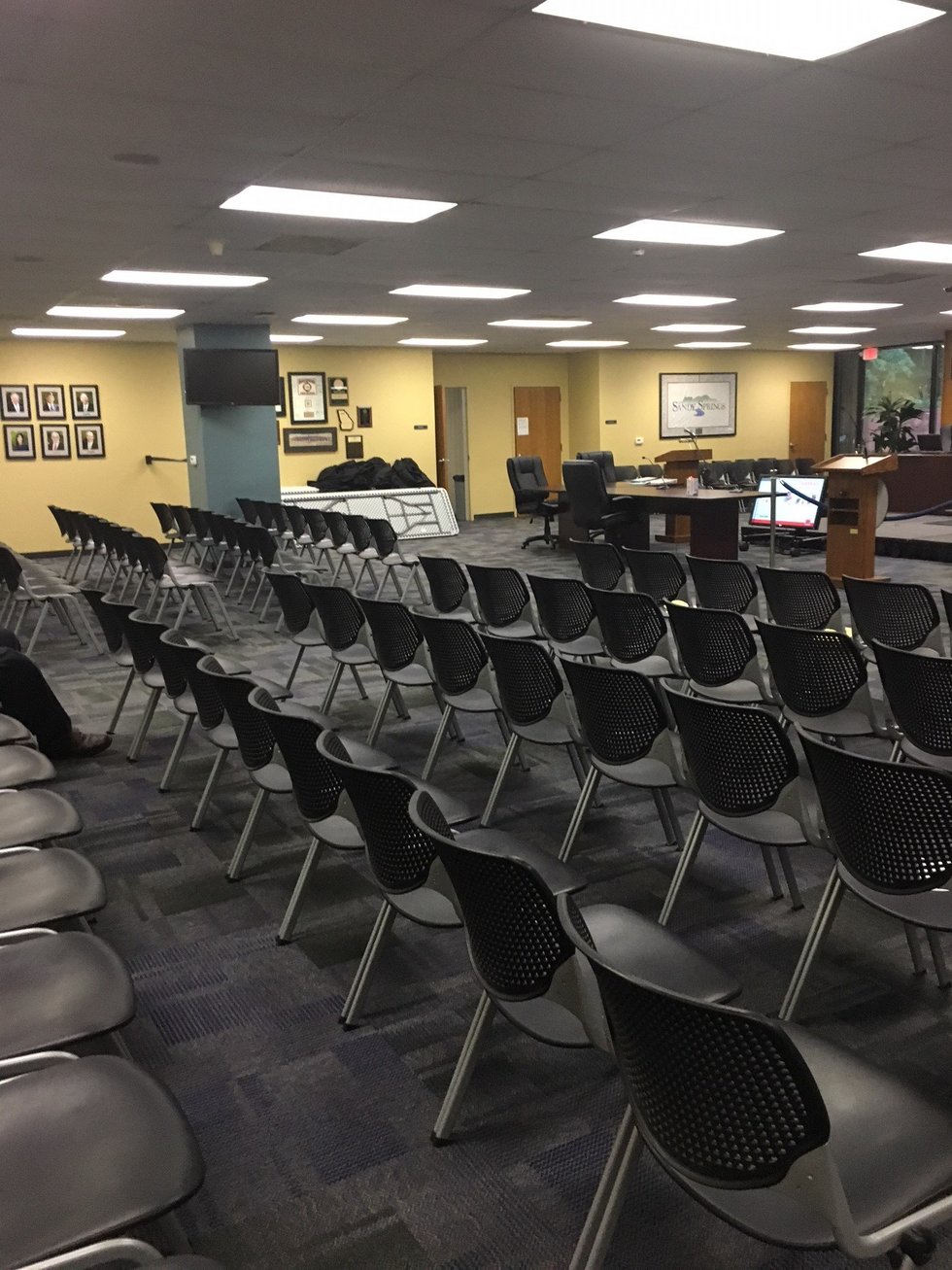 Inside the Sandy Springs Municipal Court.

Sandy Springs Officers are Trained to Do Field Sobriety Tests

A suspect can decline to take the tests.  But many suspects don't know that they can refuse them.  The tests are scored by the Sandy Springs police officer and the results can be admitted into evidence.  If an individual has physical ailments, like bad knees or back problems, the field sobriety tests are not as useful.  The defendant will claim that their performance on the tests was due to injury, not intoxication from alcohol or drugs (and, yes, prescription drugs are a legal basis for a DUI charge).

Sandy Springs Police Cars are equipped with video cameras so the field sobriety exercises and often the entire interaction with the police officer are captured on video.  This video record can be compelling evidence for either the prosecution or the defense depending on how the defendant looks and sounds.  Many DUI cases come down to how a suspect looks on video.  If a person appears "drunk," a judge or jury will tend to convict.  And if a person looks "sober," that can help the defense.  Interestingly, when a person is inside the police car the video is still being recorded.  So a person would be well advised to watch what is said and done in a Sandy Springs police car.  We have seen people make incriminating statements in the police car and even offer the cop a bribe.

A number of factors are involved in an individual's BAC level.  And no two people process alcohol in the exact same manner.  But here are some factors that help determine BAC:

Men and women are affected differently by drinking. Scientific research has concluded that alcohol has a greater effect on females than on males.  That is, the effect of drinking is stronger and lasts longer on women.

A person's weight affects BAC. A heavier individual has more body fluids that mix with the alcohol, thus having a lower BAC.

You can't "coat" your stomach and food does not actually prevent the absorption of alcohol.  But having food in your stomach does slow down the rate of absorption, so you won't get as drunk as quickly. The alcohol that a person consumes will eventually, however, get into the blood stream.

Can Police Do A Search Without A Warrant?

A common question for a person arrested for DUI is about a search conducted by the police.  Here are some of the most common situations when a police officer can do a search without a search warrant:

The "In Plain Site" Exception

But note this: a warrant is not required  for the search or seizure of items "in plain site" when the officer has a right to be present.  So that beer in the center console or the bottle of gin or vodka on the backseat or that marijuana joint in the open ashtray can be searched and seized.  If the officer made a proper stop of your vehicle and the incriminating items are in plain view, he can use them as evidence against you.

We Care Deeply About Our Clients

We care deeply about our clients.  For clients who have an alcohol or drug problem, we can help you get treatment.  Treatment can help greatly to minimize the penalties for a DUI.  Prosecutors and judges like to see people getting help.  We have had clients enter a number of quality substance abuse programs that have worked well.  Some programs are done on an outpatient basis others are inpatient. The best DUI lawyers are able to incorporate treatment options into some DUI cases.

The Sherman Law Group offers free Sandy Springs DUI consultations.  If you have been arrested, you need to contact us so we can discuss your case and what your options are.  We are there for you at 678-215-4106.